Cryptocurrency has become the latest trend among investors for the 2017 year. Most specifically the “virtual currency” of Bitcoin has almost doubled in just two months.

With the increase in use by investors, online currency banks have been under much scrutiny.

Why Are Investors Complaining?

Coinbase is a digital platform that allows users to buy and sell digital currency around the world.

Coinbase is facing the majority of complaints by their Bitcoin users.  According to the US Consumer Financial Protection Bureau(CFPB), the main complaint that they have received is that users are not getting their funds when they are promised.

With the price of Bitcoin soaring over a period of just a few months, it has become one of the most popular means of investment. This means that more people are using platforms such as Coinbase to access their currency.

In 2016 the CFPB received six complaints from consumers using the online virtual currency platform. This has increased drastically to 293 complaints up until now in 2017.

Coinbase’s co-founder and CEO, Brian Armstrong reiterated  in a June blog post that the increase in users to the site is causing the technical problems.

“As a result, our systems have been pushed to the limit. This has caused many customers to have a negative experience.”

Other online transaction sites, such as Paypal, have also received a number of complaints due to the increase in usage.

Where To From Here?

Well if you thought investing in Bitcoin was a waste of time, the currency is now sitting at R57 821.66/ Bitcoin. Just two months ago, in a previous article, we recorded that one Bitcoin was priced between R32 000- R35 000.

This means that if you had bought Bitcoin then, you would have nearly doubled your investment!

The problem is that many users are complaining that companies such as Coinbase are limiting the full usage of Bitcoin.

Instead of transactions being instant, people have complained that it can take between three to five days to process, depending on the their location and payment method.

Coinbase is surely trying to jump back on the bandwagon and increase the speed of transactions.

Here is a graph, courtesy of Bloomsberg, to illustrate the current complaints that have been received.

We can only hope that this will be rectified soon. 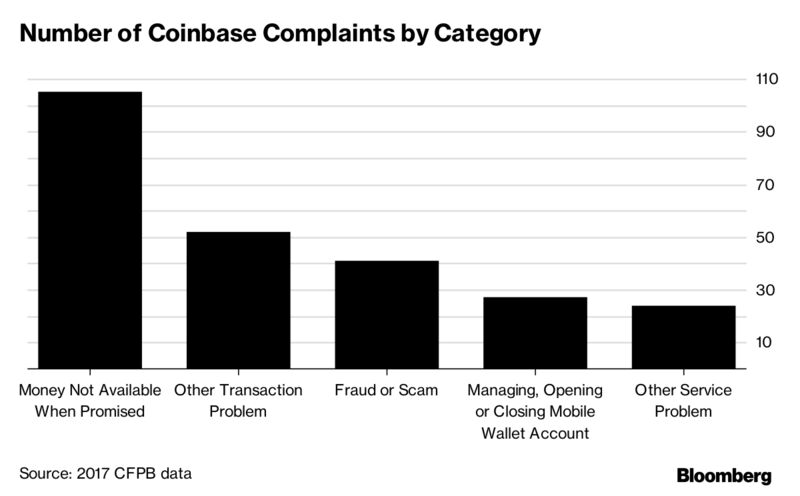 CompareGuru is the first truly independent online platform in South Africa that sources and provides a comprehensive comparative service of product options, with a focus on financial services including banking and insurance, as well as mobile and broadband. Through regular and in-depth market research, CompareGuru provides side-by-side comparisons that help consumers make informed decisions. At CompareGuru, we believe in the maxim that knowledge is power, and we strive to maximise the value for each consumer with clear, concise and up-to-date information. For more information visit http://compareguru.co.za/.